Because Liberals WIll Always Be Douche Bags 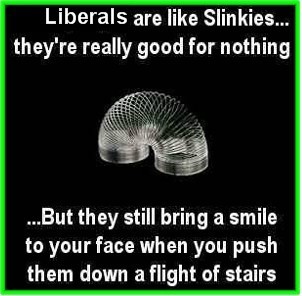 Every time a liberal speaks it is awesome.  Look at these great examples of liberal mental midgetry

1.  Could Jesse Jackson Jr. be a bigger moron than his dad?  "The Ipad is Killing Jobs".  Your dumb ass is killing my faith in the overall intelligence of Americans.
2. Al Gore actually believes that their are enough ignorant people in this country that think Global Warming is real.
3.  50% of Americans are freeloading bastards.
4.  I can't believe that Henry Waxman is still in office.  Oil companies are causing cancer from 1000 feet below the earths surface according to these liberal scumbags.
at April 17, 2011