THE WIRE - FACES OF DEATH

I say faces of death but lets be honest, we will never see the faces of those killed violently in the metro.  That is unless it happens in Joco cus we be Snitchin 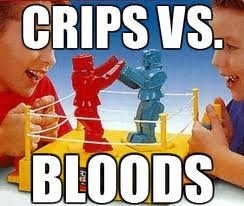 1.  They say "man dressed as woman" robbed the bank in Mission.  I say he looks more like Kat Williams than a hood rat.
2.  South Central KC? When did this become LA?  Anyways, 2 fine upstanding citizens shot.
3.  Isn't getting shot at a KCMO school part of their vo-tech program?  Give this man an A+
4.  The one kid that attends school in KCK got hit by a car this morning.
5.  Is South Benton crappier than North, East or West Benton - 2 shot.
6.  Finally, the return of the knife.  Remember all the stabbings a few years ago?  Stabbed, KCMO
7.  The man that brought us Kyle James is going to bring back the city's violent crime commission.  Otherwise known as Kyle James babysitters.
8.  2 more people make the KCMO honor roll
9.  Willie Nixon is going after Kyle James title.
10.  KCMO rounds out the weekend with a nice triple play this afternoon. 3 shot
at September 12, 2011