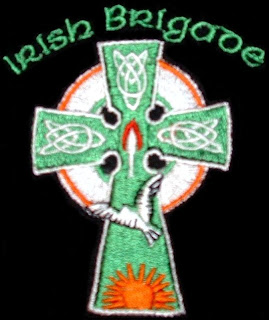 Every year at this time people of all races and countries of origin come together to claim that they are Irish.  They do this by drinking and wearing green shirts with stupid ass slogans on them and puking their guts out in city streets.  Awesome representation of our heritage right?  Ask anybody at the parade who Bobby Sands is or about the riots in 1969 and they will say that he is the inventor of Guinness and the riots were because they ran out of Whiskey.  To them Bloody Sunday is nothing more than a U2 song and not a time where 26 unarmed civilians were murdered in cold blood by English invaders who remain to this day.

Could you imagine the stereotypes that would be played out if we followed the same guidelines with Black History month?
Screw it, enjoy the links.

1.  10 St. Patrick's Day apps for the drunken bastard in all of us.
2.  What would St. Patrick's Day be without a drink with shamrock in the title?  Shamrock Sour
3.  10 Things to know about St. Patrick's Day.
4.  Who is John Boyle O'Reilly
5.  6 benefits of drinking to throw in the faces of those that will try to stop you from drinking until you puke.
6.  How to pour Guinness properly you heathens
7.  Official link to Kansas City's parade.
8.  Urban Outfitters say that all Irish are drunks .  At least they used a hot model.
9.  Nike releases "Black & Tan" shoes.
10.  Best celebrations in the United States.  Kansas City doesn't make the list
11.  St. Patrick's Day Parade in Dublin
12.  Those of us in Blue Valley don't need to travel far for our Irish Pub. Llywelyns Pub. And for our elitist friends in Prairie Village their is O'Neills