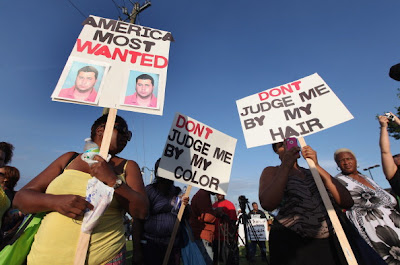 So where are these protesters when there are 120+ black on black murders in their communities?   Have you ever seen crack houses stood in front of and blocked?  Where are the bounties  on gang leaders?  How many "reverends" with talk shows showed up this weekend when Kyle James's friend got gunned down? NONE, NEVER and why is that?

Because they are too chicken shit to stand up to people that are actually cold blooded killers.  Crap, those dudes in front of the police station would run if they actually went where the real violence was happening and I am not talking about walking with candles down a street.  Point out the drug houses, act as witnesses to crimes instead of not "snitching".

Take the war to the gangs.  Why doesn't the national black panther party have bounties out for the leaders of the crips, bloods, folks, vice lords etc..?  Because they are freaking hypocrites.  Self serving headline grabbers who thrive off of this crap.

While the rest of America is watching this whole circus act in Florida our own community is averaging   a couple of shooting a day, several murders a week and countless lives ruined.  All because the color of the skin of the killer is the same as the victim.
at April 10, 2012