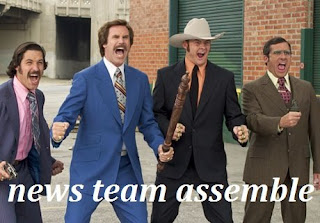 Back in 2008 I wrote a post titled "Top 10 Media Idiots in KC" which blasted the so called media elite in this town.  These so called elite were suppose to be the best of what KC had to offer, or at least that is what they thought.  If you take a look at the top 10 from 4 years ago there is only 1 that has continued to be an actual viable KC personality and that is Kevin Kietzman.

The others are either gone or have been reduced to career rubble.
1.  Hearnes Christopher - Obsolete
2.  Jeffery Flannagan - Obsolete
3. Ash-har Quraish - Ran out of town
4.  Katie Horner - Obsolete
5.  Neal & Marty - Obsolete
6.  Steve Rose  - Lost everything
7.  Entercom Radio - Continues to be a revolving door of cluster fucks


8.  Mike Hedricks - Become Mr. Irrelevant
9.  Devon Lucie - Was put on the list as a joke because of his last name but he is even gone.

What this information shows us is that there are only a handful of local media types than you can count on in this city and can actually be called residents of this area.  The rest are carpet baggers collecting a check in this city.

Time always catches up with the hacks in this town and the next group are on the clock.
at August 10, 2012