These aren't opinions, these are facts.


1.  Biggest Local Hypocrite - Dana Wrights stance on guns (especially after Newtown) yet having a gun show run several commercials during her show during that exact time frame 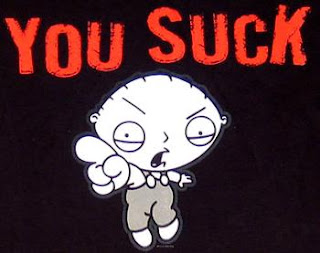 2.  Biggest Athlete disappointment - Eric Hosmers flop this year is worst than any crap that the Chiefs had this year.
3.  Worst Radio Station - 710.  Does anyone listen to this channel?  They use to have the nutjob show on at night and now they don't even have that.
4.  Biggest Douche Bag neighborhood - Lionsgate.
5.  Worst Radio Show Host - The guy that comes on before Rush on 980.  I listened to the show the first week and haven't bothered listening since.  Nothing more than a bad Conan O'Brien wannabe hipster.
6.  Worst Johnson County City - Prairie Village.  The uptight snobs have taken douche bag elitism to a level never seen before.  Oh, and lets not forget their closing of the Christmas House on Falmouth.  Assholes. Worst Metro City - Independence.  This place might be the biggest eyesore in the Midwest
7.  Worst Parents - Baby Lisa's WT parents.
8.  Biggest Joke of a Person in KC - Kyle James and his wannabe gangsta rapping self.  Malibus Most wanted is more gangster than this silver spoon daddies boy.
9.  Worst Local Politician - Todd Akin.  This guy was probably the worst candidate in the history of candidates.
10.  Worst Local Church - International House of Prayer.  This cult is dangerous.
11.  Dumbest thing said on Radio - "When did this city get so violent?" Dana Wright KMBZ .
12.  Worst Media decision - Paywall by KC STAR.  - There were several good candidates for this one but the Star charging  $109 a YEAR takes the cake.
13.  Worst Retail Blight.  95th and Metcalf. Kmart, Metcalf South and abandoned towers....
14.  Biggest Government blunder - KS DMV and then considering charging us all a $2 fee to make up for their mistakes.
15.  Worst JOCO Celebration - Old Settlers days - When you can't tell the carnies from the residents you might have a problem.
16.  Worst School in Joco - SM West wins this one.  Remember the kid with the knife?  Have you seen their test scores?
17.  Biggest Threat to Freedom in KC - Phil Cosby and the American Family Association.  If you ever had any doubts about the extremism of the religious right then statue gate should of eliminated them
at December 28, 2012