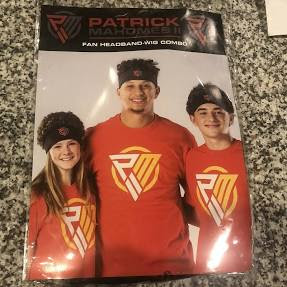 I never read the Star.  It has been a garbage paper for a long time and it seems that ever since George Floyd was murdered by a racist cop in Mn, they have been going out of their way to make up for their own inadequacies with black folks.  So, I come across this wonderful headline and
simply shake my head.

So, they sell these wigs all over the place right?  Mahomes has a white mother correct?  This has been seen worn by little kids and adults of all races across the country for a long time right?  BUT this columnists decided to say ohhhhhhhhhhhh JOCO white teacher, GOT HIM!  Honestly, I had never even heard of TORIANO PORTER until today, so his race baiting worked for click bait but it might have damaged this guys credibility in the long run.

He did find a few token white folks to sprinkle in about their feelings.  Ya know ask 100 people and you will surely find a few with opinions that match your slant.  And lets be honest, white people from JOCO will always give you the exact quote you want because they are shook.

Scanning this guys stories one tends to see a pattern.  He even went on to be critical of the "Big Slick" charity events in KC because there were too many pale faced individuals.  Hmmm.  So even celebs raising money that is distributed through out the community regardless of race are pieces of shit to this clown.  He even wrote an article about how a shooting in KCK could have been avoided.. COULDN'T ALL SHOOTINGS BE AVOIDED!

This guy moved to KC from STL to get away from violence!!!!!!  So obviously he is pretty shitty at research.  The Star brought him here to say "ohh we get black people now", and if he knew anything of the Star and its racist past then he MIGHT have passed on the job.  What does it say about a guy that wants to be critical of everything race in the city yet he works for The Star and took that gig in 2018 when the facts were out there about the Paper?  Going to work for a racist paper is even worst than supporting a racist retailer.

A check is a check I guess.  So while reading this guys "opinions", consider the source, the history etc..

FYI, might want to tell Mahomes to lecture the white girl in the freaking ad that he is in about her wrongdoing.  Ya know, hey, i am glad you are posing with me in my wig but you are white...

The writer also might want to peel back on his white people cant grow an afro take too.  Has he ever met a Jewish person?