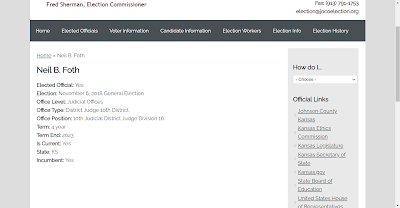 The joy that one gets when they realize that sooner rather than later the Judge that was at the root of all corruption allegations will soon be up for election is well,
amazing.  You see, when my case was first making its way into the JOCO court system this jaggoff had just begun a new term as Judge.  I could only begin to shed some light on the issues plaguing the JOCO courts and this "man".  That all starts to change now that we are officially 1 year away from campaign time.

The gloves will officially start to come off and the closer we get to the election, the more aggressive my "campaign" to have him voted out will become.  We will outline the following and provide well documented and researched examples of the following

Most people go to the ballot box and simply vote YES to keep judges because they have never heard of them.  This official will have name notoriety on social media, podcasts, and of course this shitty unread (JOCO courts no that is tongue and check) blog.

Public officials are supposed to be held accountable through the ballot box right? Will JOCO do the right thing.  I am thinking yes....