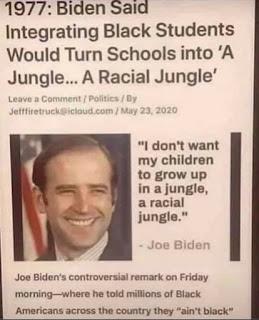 Think about their arguments for both CRT and voting for just one minute.  If you side with either of their stances on these issues then you are saying that black people are inferior to white folks.  There is no other way to explain it.  Then you add on their stance on crime and policing and the whole thing takes form.

1.  Voter ID - They are saying that having to produce an ID to vote is racist because black folks aren't capable of obtaining a Photo ID.  REALLY?  So black people do not drive, fly, have bank accounts, attend universities, have government assistance, health care, etc..  ???????????  Try to go a month in the United States without a photo ID in your daily existence and tell me if it is possible   Even if you are purple, you need a photo ID to do just about anything/everything.  So WHY is voting, which is supposed to be the most sacred of all duties a citizen performs not as important as say purchasing booze/tobacco?  If you are within 20 years of 18 then you must provide ID to retailers to purchase Booze and Cigs.  UNREAL!

2 CRT - They are actually pushing a narrative that says that white people are superior and that black folks are inferior!  They create divides amongst kids that honestly could give a shit about the skin color of their classmates.  Then they say that Asians and Hispanics are a superior minority group to black by limiting their opportunities to attend certain public schools??  Imagine being an 8-year-old in one of these classrooms and having this crap shoved down your throat?  "Well, if the teacher is saying that I hate black people then I guess I do" or, "I thought that I could grow up and work hard and become whatever I want like I see all over the country, but I am not good enough unless the white people allow me to".  Despite business leaders, politicians, entertainers, athletes, etc.. that are black everywhere you look in this country.  It is insane.

3. 187- If the above doesn't make you feel worst by democrats for being black then well, they will just put into place zones where black people can kill other black people.  These liberal mayors have run these now shit hole cities for generations and murder rates were already high but THEN they push for defunding of police departments to push their murder rates higher. The mayors (many of them black) are actually overseeing an ethnic cleansing!

Democrats were the party of the KKK right?  Joe Biden was best friends with many of the biggest racists in US political history.  Biden called black folks monsters and where they lived jungles.  He said that when Obama was nominated that finally there was an articulate black.  His own VP accused him of racism while she herself was the most self-hating minority in all of California and locked up generations of black males on made-up charges.  Democrats were against the civil rights movement in the '60s.  Every policy that they have ever created for black folks in the country has called for them to depend on the government for survival.

The good news, black folks have realized this all over the country and are starting to speak out against the policies of elitist politicians.  They see that they are being exploited every 4 years for votes and that legislation that is supposed to be for them is actually for others.