Another Liberal Elitist Bites the Dust 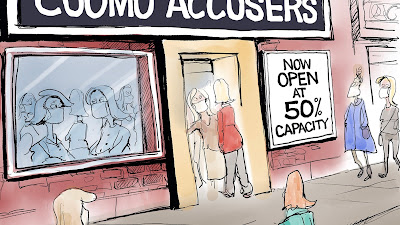 Those on the left that typically bark the loudest about causes are typically those that are the most
guilty of what it is that they are "fighting for". If only Cuomo was as worried about dropping nursing home deaths as he was in dropping staffers' panties, imagine how many lives could have been saved.

Defund the Police - Hollywood/Political left take cops off the streets of your neighborhoods while hiring extra private security for themselves.

Immigration - Hollywood/Political left to say that Trump put them in cages (it was Obama) while Biden has soo many kids in cages that they are being sexually assaulted, suicidal, and catching Covid.  Not to mention the hundreds that die or get raped along the way to the border.  Remember, they are compassionate towards illegals...

Covid - Hollywood/Political left before the election said that they didn't trust the vaccine because Trump was "behind it".  Now they accuse Republicans (despite proof that it is across all parties) of being against the vaccine while stating that they are all for it...

This is what happens when you become a follower, you fall for elitist lies and bullshit because you are so desperate to believe in someone.  Maybe you are insecure about your own feelings and stances and run with the herd, buy into the publicist narrative over certain people because you think "oh, if he/she is for it then it must be great.  If you fall into one of the above then you are either a coward or a moron.  This goes for Republicans too in regards to Trump.  The man was a walking contradiction of everything Republicans stood for, yet you nominated him when there were far better choices in 2015 for the nomination.

And, if you don't believe the DA report, does that make you a racist and sexist since the DA is a black woman? hmmmmmmmmmmmm.  Ahh, to be a socialist must be tough right now.