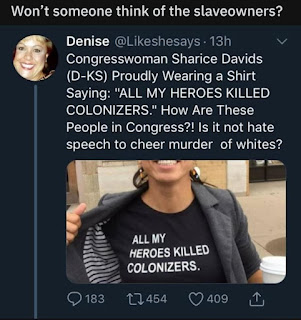 The lies coming out of the mouth of Sharice Davids are AMAZING!  No Rep Davids,
DEMOCRATS stalled the infrastructure bill to push their Green New deal infrastructure bill, which is dead because DEMS are blocking it.  Not Republicans you lying idiot.

1.  Bipartisan bill that actually addresses concerns like the bridge that you are standing in front of.

2.  The reconciliation bill that handles all the PORK social spending crap that only you socialists want.  AND THAT BILL doesn't include any of the crap that you are grandstanding about.

The truth since this moron is trying to trick you is this.  The DEMS are holding up the infrastructure bill because they are currently fighting amongst themselves over the #2 bill.  Republicans are ready to spend on airports, bridges, roads, water, you know, infrastructure.  YOUR PARTY is holding this bill up because they can't agree on the 3.5 trillion socialist bill that you said must be passed first before the #1 bill is voted on.

So please, take your lies back to whatever state you came from before you decided to call Kansas home for political reasons.