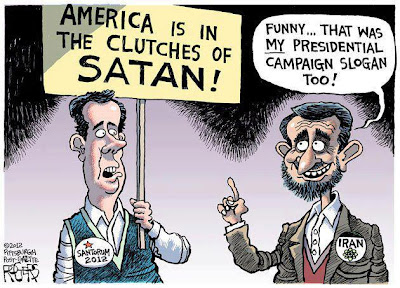 This is all we need right?  Some guy dictating to us how to live through his interpretation of the bible and utilizing the government to enforce his beliefs.  He is all for big government as long as it is used to push his ridiculous agenda of purity.  This is the same group that thinks that selling beer in grocery stores is evil, gambling is the work of the devil and a woman's place is in the kitchen pregnant.  And if those are his beliefs FINE just don't push them on the rest of us.I had no problem with what he believed in until he did that.

So I will now officially support Mitt Romney because maybe being the most conservative candidate (in the eyes of the bible thumpers) isn't something that America needs.
at March 15, 2012