Recession of hope and bankruptcy of change

This will be a very entertaining week for those of us that have the ability to separate Bullshit from reality and laugh at it.  Has there ever been a bigger group of liars, cheats, backstabbers, hustlers, criminals and ugly people assembled in one place (besides an MU Game)? 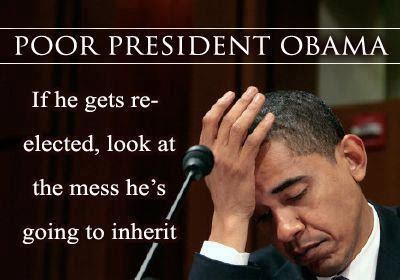 I can't believe that some of you are actually considering voting for a man that has done more damage to this country in 4 years than Bush did in 8.  Then again, half of this country is looking for a handout and incapable of taking care of themselves, just look around you.  On your way to work,  at your kids schools, in your neighborhoods and yes even your family, there are Obama people that complain about how unfair life is and how they should have this or that and that it is just too hard to survive in America.

The Obama supporters are clueless when asked on why they like him or any of his policies or how those policies have helped them.  They get angry, red faced and scream over you when you ask questions about his policies and agenda.  You should know by now that the reason they act this way is due to their limited IQ and lack of facts.  Just look at how loosely they throw around the terms racist, bigot, sexist and homophobic anytime that they are stuck in a corner.
My beliefs are simple
Notice I didn't mention 1 single freaking social issue or government handout?  Why is it so hard for us to stay out of the lives and pockets of others in this country?  I don't get it.  AND I am not a hypocrite on these issues.
So its simple.  Romney is as close to that as we can get so he gets my vote.  The rest of the crap means absolutely nothing to me.

What does get to me is this hate, race baiting and division that this president is pushing just so that he can get reelected and take my money, limit the size of cokes I can drink, control my healthcare, control my business decisions and well basically control every aspect of my life except for what happens in my bedroom.  Other than that, they want total control and will stop at nothing to remain in power to finish their socialist plans for this country.

Think about it.  Obama's biggest attacks on Republicans are all sex related.  Birth control, gay marriage and abortion.  WTF?????  Basically what they are saying is that they are willing to fund as much protected sex as you want in exchange for controlling the rest of your life.  Oh and if you run out of government birth control you can go to a government clinic and have an abortion on the tax payers.

You lemmings are pathetic.