Remember when the SMSD was the best district in the city?  Where common sense overruled liberal ideals that set many other districts back?  Well it is obvious that the current leadership is trying to go the PC route by "taking strongest stand possible against firearms on school property". 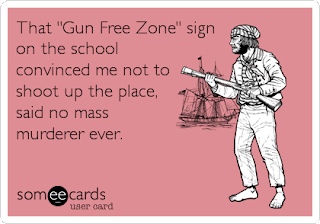 That's right folks, people that want to shoot up schools, buses and sporting events will now be frightened of the No Guns on premises signs that will go up district wide.  Even though this tactic has proven to be more symbolism than substance through out the nation, the SMSD believes that it will work this time.

Maybe they believe that since the literacy rate in JOCO is amongst the highest in the nation that suicidal murdering maniacs will READ their sign and stop.
at August 28, 2013