Comparing 2020 election to the Bush vs Gore disaster

I will keep this brief because it is easy to sum up the post election fallout difference and how it is that Republicans took the throne after hanging chads vs. this latest election fraud fiasco.  There is one man and one man alone that can be put at the center of the epic failure of the Republican party to win public opinion and to make it a nonissue going forward for the media, and 55% of the population.  No, it isn't Donald Trump.  It is the one time great mayor of NYC, Rudy Guilliani. 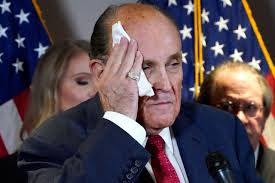 How could anyone take any claims seriously after watching Rudy on the news bumble and fumble his way through "facts" and what credibility did he have once he got caught with those 2 Ukrainian lobbyists in Florida?  Like most Gen Xers that lived through September 11th, I became a huge fan of the mayor.  The way that he guided our country through the day to day aftermath of the worst attack on American soil was something that if you weren't alive to witness is extremely hard to put into words.  The man was beloved by all.. 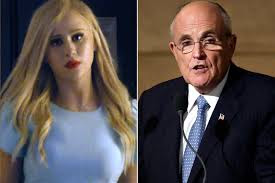 Enter the Rudy that we have all witnessed as Trumps pet gargoyle.  The man is probably 10 years
past his shelf life of being a public persona.  He seems drunk, loose with the facts, messy and gives zero fucks about attention to detail.  He is the lawyer that took down the mafia in NYC and yet he can't speak clearly about voter fraud?  Dude should have remained a talking head on cable news and never EVER been given an official role in the administration as a personal attorney.