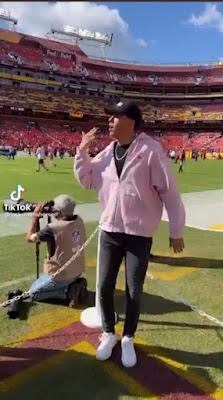 So the rest of the world thinks that Jackson Mahomes is a complete
douchebag and the local media, well, they are so afraid of losing access to the Chiefs that they aren't covering the story of him being well him.  When we signed Mahomes to 500 million did we realize that we were getting the whole attention-seeking family?  People, with no talent other than being his brother or his fiance (funny, still not married??)

It takes a special kind of douchebag to tik down dance on the number of a slain player whose number was getting retired that freaking day.  His excuses are bullshit. Who cares if the WFT had them stand on the number (they didn't), that doesn't give you a green light to douche it up on his freaking number and disrespect the man.  A man who actually was great, not related to great.  Where is the coverage here locally?  You literally can't turn on a national show without hearing about this story and the lame cover-up and insincere apology that followed once the cover-up fell apart.

This isn't an isolated incident of douchebaggery, just the latest in this coattail rider's attempt to make a name for himself.

This proves once again that the KC media is a complete joke.