150 people in JOCO are Super Woke 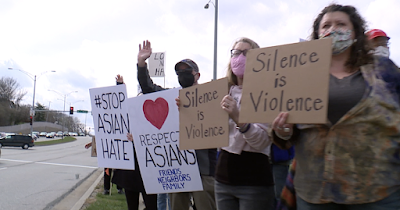 Now JOCO may have its fair share of issues but having lived there for 40 years I
can safely say that hatred towards AAPI is not one of them.  If it was then there would probably have been a demonstration about an event that happened locally and not half the country away by some lunatic.  In fact, there have only been 2 occasions in my life that JOCO suffered real racial crimes and neither of them was directed towards Asians.

1.  The shooting at the Jewish Community Center - Was carried out by some redneck psycho from SE Missouri.  He came to the area because he preyed upon our diversity.  You see there isn't one person in JOCO regardless of faith that hasn't attended a Bar Mitzvah.  If they haven't then they probably never got invited to any other events either.

2.  The shooting of folks in Olathe that he thought were Al Queda.  This mental midget was homegrown and might have been the stupidest fuck in the area.  You see, he shot non-Muslims because they were brown and spoke "funny".  Even this jackass was barely a JOCO resident.

In both instances, the community rallied against the hate quickly. End of story.

BUT JOCO whites in a chatroom decided that something should finally be done in JOCO to raise awareness of a problem that doesn't exist in their community.  HOW VERY BRAVE!  This had far less to do with the AAPI community and more about their own self-worth.

Oh, and a special fuck you to those that hold signs saying "silence is violence".  No, violence is violence.  Your crying wolf and exploitation of tragedies to make you feel better about being white do more harm than good. Those of us who have nearly died due to violence understand what violence is.