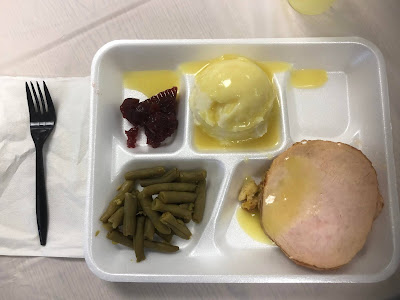 Wow!  So one of the wealthiest school districts in the metro area isn't capable of acquiring the ingredients for what they consider turkey, mashed potatoes, and pumpkin freaking pie!  This meal is not made up of the freshest of ingredients and the prep techniques aren't exactly those that one would find on the Food Network so this coverup is complete BS and the Star is once again laying down political cover for elitist Marxist hacks wanting to do away with anything/everything that is American.

Why else would they be canceling the meal and at the same time state that they are looking for better ways to include all cultures into their holiday meals?????????????

I am not here to argue whether or not the pilgrims killed native Americans.  Yes, they did.  500 years ago!  Guess what! Everyone was killing everyone 500 years ago!  Humans aren't exactly peaceful.  Wars, conquering, etc.. are part of EVERY CULTURE on the planet.   Being woke, you must say that you are sorry for winning wars and make amends for shit that took place in a time period LONG before most people can even trace their family trees back to.

How about this!  If you can trace your family trees back to the freaking Mayflower, then you should be forced to skip Thanksgiving.  The government can send in the FBI to your homes and make sure that you order Pizza that Thursday.

Most of us look at the day as nothing more than a day to be thankful that we are alive and somewhat free Americans.  I seriously doubt that there is anyone that looks at it as some great victory feast!  Maybe some Qannon wackos, but that is it.  Are we next going to apologize to the British for defeating them and becoming a country?  The French?  The Spanish?  Even though all of them conquered other countries etc...  Do you honestly believe that native American tribes didn't conquer each other?  If you do then you know absolutely nothing about history.

So way to go, and take a stand by taking Turkey away from kids and then lying to parents about it being a supply chain issue.  Such bravery!  Such heroic actions!  Something I am sure that they will celebrate as they sit at home on Thanksgiving and celebrate with a Turkey dinner because you know, they are all kinda hypocrites.