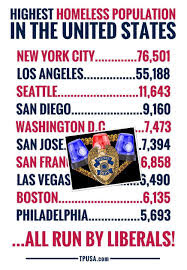 the trend of middle-class housing go bye-bye.  This blog has covered it (long before it became newsworthy) since our return to blogging a few years back but almost no other media outlet has brought it up.  Instead, they were minions to developers looking to transition the metro into an Oasis of expensive apartments and retail shops.  Call it multiuse and put some unknown artist's statue in the middle and the media ate it up.  Hell, so did you.
Now you are getting trickle-down housing.  Those folks that use to be able to afford homes in JOCO are now having to either move into shit apartments or move to KCMO.  This in turn raises the prices of those people living in KCMO which forces those residents out. And so on, and so on.
'
The end result, Homelessness.  See NYC, San Fran, L.A., Austin, etc...
How long before metro residents are stepping over human feces and needles?
at July 14, 2022