When you support a candidate that sucks

A special PSA to all of you Biden & Trump supporters 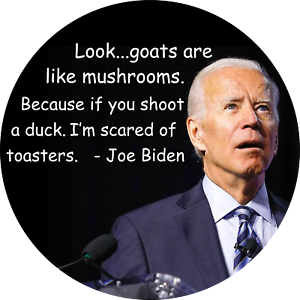 When you elect a douchebag that is bad for America, that is on you.  You must take
ownership for your vote and stand by your elderly white man.  Both parties have run terrible candidates in the nationwide for 2 straight cycles.  To say that both parties had better candidates that lost in the primaries is a bit of an understatement.

As a Republican, I was shocked at how Trump won the nomination in 2016.  There were at least 3 other candidates that were more qualified and showed a better temperament than he did.  I took to Twitter, Facebook, the RNC and stated as much.  In 2019, I didn't vote. for either major party candidates.  Shit Kanye would have been a better president than either Trump or ancient, bought and paid for, senile Biden.  I did vote Republican for local elections but that was it.

I get it though, I hated Hillary and voted for Trump in 2016.  You probably hated Trump and voted for Biden in 2019, The difference was, I never supported him on this blog or privately.  You dipshits all seem to think that Biden is a good decent person.  It is nice to care for senior citizens, help them lift heavy objects, and listen to their stories but do you let them drive to the store?  Fuck no.  Yet you voted this idiot in charge of the free world.  Good job.

So for that reason, this blog will dedicate itself towards lumping all of you that voted for Biden in with every single action Biden or any of his supporters take.  Kinda like how you lumped together with any Republican in with any dipshit thing Trump or his supporters did.